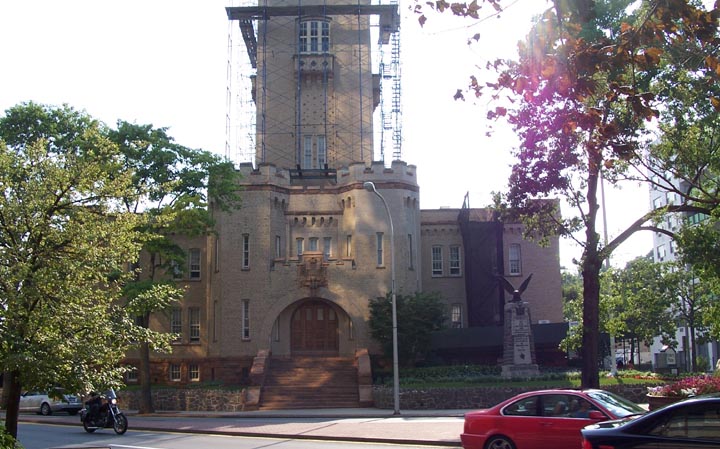 The cornerstone of the armory was laid on March 31st, 1909. The main speaker of the day was Senator J. Mayhew Wainwright. A member of the family, General Jonathan Mayhew Wainwright, would later gain fame as a hero of Corregidor during World War II. The president of the Village Board of Trustees, Frederick S. Barnum, introduced the senator.

That year, the armory greeted its first occupant, Company L 10th Regiment of the National Guard, newly organized with a membership of seventy-six. During World War I this company served in France for 18 months. Many of the men were wounded or lost their lives, including their captain, Frederick W. Cobb. The New York National Guard was federalized in the 1920s. In 1927 the 102nd Medical Regiment moved into the armory and later served in the Pacific during World War II.

The yellow brick castle-like armory lifts its crenelated tower one hundred and ten feet into the sky. The smaller matching towers flank the broad arched entrance. The windows are high and narrow. Buttresses supported the 130-foot-long drill shed where galleries looked down upon the drill floor.

The monument in front of the building, topped with a spread-winged eagle, was erected by the White Plains Chapter of the Daughters of the American Revolution in 1910 to commemorate this historic site where the Declaration of Independence was read for the first time in New York State. The monument's base was built with stones taken from the foundation of the first courthouse.